Skip to Content
194 shares
This article may contain links from our partners. Please read our Disclaimer for more information. 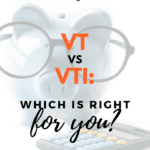 When anyone looks into purchasing stocks or investing, people sometimes overlook index funds and lean towards heavy-hitting, high-risk, high-rewards individual stock picking. While those can be a great way to make large amounts of money over time for your portfolio, it might be a better idea to invest some money in funds that are lower risk with potentially decent rewards down the line. In this article we’re going to break down two funds for you: VT vs VTI.

Index funds are passive funds, which separates it from the actively-managed mutual funds. While a mutual fund is managed by people, index funds are what some call lazy portfolios. They are not managed by anyone and are automated to match lists like the S&P 500.

Both VT and VTI are offered by Vanguard Group and are considered to be low cost index funds. They are extremely similar in how they work and somewhat so with pricing to buy in, but there is a major difference in what each fund consists of.

Continue reading to find out the difference between both ETFs and get information on what the best fund to invest in is!

VT (Vanguard Total World Stock ETF) is an index fund that consists of international and United States-based public companies. In fact, it holds stock in every public company in the world, around 8,437. This means that if a company at the higher end of the spectrum, like Apple, does great things to put more money in your pocket, it will have a smaller impact on the worth of your fund.

However, a major positive is that if foreign companies perform well, then you’ll get a tiny boost off of that company’s success. Nestle SA, for example, would be included in VT.

This index fund tracks the performance of the FTSE Global All Cap Index, which Vanguard says “covers both well-established and still-developing markets.”

Because it includes every public company in the world, it’ll provide potential for long-term gains as long as the global economy continues to tick up.

VTI (Vanguard Total Stock Market ETF) is an index fund that only consists of United States-based public companies and its investors.

It holds stock in all of the companies on the market, which is around 3,513.

It tracks the performance of the CRSP US Total Market Index Fund.

This fund is well-invested, and Vanguard says that its “low expense minimizes net tracking errors.”

Read our related article to see the difference between VTSAX and VTI!

VT vs VTI: The Real Differences

As you can already tell, the biggest difference is that the VT fund and the VTI fund is an international and American fund vs an only-American fund. There’s more minute differences, however.

Overview of VT and VTI

Both VT and VTI are ETFs, or exchange traded funds. That means, for beginners, that you can exchange, purchase and sell these stocks on the market much like a stock.

Their expense ratios – the percentage of a fund’s assets that go specifically towards administrative purposes – are low, as index funds typically are, but different. VT’s expenses ratio is .08%, and VTI’s expense ratio is .03%.

Basically, for every $10,000 that you put into a VT, for example, $8 of that will go towards administrative purposes.

Composition of VT vs VTI

Here’s where the big differences of VT and VTI come into play. As previously stated, VT consists of all the public companies in the world, over 8,000. VTI consist only of American public companies, over 3,500.

It’s not a bad thing to have more of almost anything, but it could be a bad thing with VTs. Since international companies overall are not as successful as American companies on the market, it adds a bunch of unwanted companies to the stock’s overall fund, which devalues the entire load of assets in general.

However, if an international company gets extremely large, having VT may see big gains off of it. While it may seem less attractive than VTI, the price of a share is practically half.

Performance of VT vs VTI

VT and VTI statistical performance only goes back to the early 2000s, but Vanguard’s researchers analyzed returns from both international and American funds back to the 1970s.

What they found was that both American and international stocks have taken turns outperforming each other over a period of around 50 years. While most of the top public companies are American, international companies always tend to have solid showings against the country.

Due to VT consisting of more than 8,000 companies, it has much less volatility than VTI. That also means that a single company will affect the total fund much less than one in a VTI. Lastly, they found that VT portfolios experienced a higher risk-adjusted return than VTIs.

Let’s take a look at the past performance from 2010-2020, based on an initial investment of $10,000 with no additional investment.

Looking at their CGAR value or Compound Annual Growth Rate, VT would receive 7.12% and VTI would be at 11.77%.

For a long term investor, having a diversified portfolio is important. Select an international exposure that suits your desired asset allocation.

Sticking with lower expense ratios, understanding what each fund’s net assets are, and seeing what their top 10 holdings are composed of are all important factors.

Is VTI a safe investment?

When the market is extremely volatile, it might mean a lower share price and a higher return down the line.

Are VTI and VT the same?

There is quite a bit of overlap though, since much of VT includes companies held by VTI. Currently they share 1717 overlapping shares. However keep in mind these have different investment strategy plans. While they both try to diversify, their total return will be different since their asset classes are different.

Is it a good time to buy VTI?

Anytime is a great time to buy a VTI share! With its long-term growth, it is another way to achieve the second part of the FIRE Movement – retiring early.

Time in the market is better than timing the market, so while yesterday was the best time to invest for its long-term growth, today is the second-best day.

Research shows that those who invest consistently over time are better off, so why not but into it now?

Vanguard offers many different types of investment opportunities, so if you aren’t in love with its ETF options, maybe admiral shares are more your speed!

VT vs VTI: Which Should You Invest In?

So should you invest in VT or VTI? Well… Why not both? It’s not a bad idea to invest in both at the same time. Maybe you could put 60% in VTI and 40% in VT, this gives you some international exposure. There’s really no bad option to have a diversified stock market portfolio.

At the end of the day, you should invest in what you feel is the best for your goals. And these two are both good options to look into. Because they are Vanguard’s Mutual Fund ETFs, they have a lower expense ratio than some of their competitors. These funds also don’t require minimum investment amounts other than their current share price which makes them easily accessible for most investors since they’re relatively low cost.

Do you have a favorite ETF? Let us know in the comments which one and why!

This is a clear explanation thank you!