Skip to Content
55 shares
This article may contain links from our partners. Please read our Disclaimer for more information. 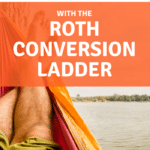 Many of you know that if you try to take money out of a 401k or traditional IRA early, there will be a 10% early withdrawal penalty. This isn’t good news for the FIRE community, most of whom plan to access these investment funds well before they turn 59 ½. Thankfully there is a solution to this problem- the roth conversion ladder.

If you want to retire early, then you need to know everything about how the roth conversion ladder can work for you.

What Is a Roth Conversion Ladder?

A roth conversion ladder allows early retirees to access their largest pool of money (401k or/+ IRA) tax and penalty-free. Without this technique, anyone who retires before age 59 ½ and tries to tap into their retirement savings will be subjected to an early withdrawal 10% penalty.

How Does a Roth Conversion Ladder Work?

In the FIRE community, individuals will amass a large amount of net worth in investment accounts like a 401k or traditional IRA in order to retire early. The plan is to live on these investments. But, you will need to access retirement funds that are stored away in these accounts early, and normally that would mean a 10% tax penalty.

The roth conversion ladder involves moving your money from a tax-sheltered account (i.e. 401k or* IRA) into a roth IRA. By doing this, you can withdraw the money from the roth IRA penalty-free after 5 years.

The Difference Between a Roth IRA and Tax Sheltered Accounts

Roth IRA’s are already taxed investment accounts. This means the money you put into the account has already had taxes taken out, so when you withdraw from the roth in the future you do not need to pay tax.

In contrast, 401k and traditional IRA account contributions are not taxed by federal income tax (this is why they are referred to as tax-sheltered accounts). You will pay taxes when money is withdrawn in the future. In the meantime, you receive a tax break for contributions you make each year.

There are two things you should know about a roth IRA:

When you move your money from a tax-sheltered account to a roth it’s not treated as a normal contribution. Instead, it’s a conversion and it must sit there for 5 years. Then you can withdraw it with no penalties. This is the basis for the roth conversion ladder and how you can withdraw money from your tax-sheltered accounts without penalty before 59 ½.

Check out our article on How To FI to learn more about how to get started pursing financial independence!

How to Create a Roth IRA Conversion Ladder

As you prepare for early retirement, you will be saving a significant portion of your income and (hopefully) maxing out your retirement accounts. This looks different for every FIRE journey, but the goal is the same: build a bucket of money in your tax-sheltered accounts to reach your FI number.

Common accounts you build while working are:

Once you have built your net worth to your FI number, then you’re ready to retire early! When you reach retirement you should have already done the following:

Step 3: Transfer 401k or 403b Retirement Funds to a Traditional IRA

In order to make the roth conversion ladder work, you need to convert money from your IRA to a roth. This means rolling over however much you plan to convert in total from your 401k or 403b to a Traditional IRA. The traditional IRA will then act as the “big bucket” that you make conversions from.

The year you retire, you can do a conversion and move a certain portion of funds from your IRA to your roth. The amount you convert is typically one years worth of expenses (how much you plan to live on).

For example, if you want to live on a fixed amount every year such as $40,000 a year- then when you’re ready to retire you would move over $40,000 from your traditional IRA to your roth IRA. Keep in mind that you will pay ordinary income tax on the amount you are converting, because you have never paid taxes on this money before.

Step 5: Convert Partial Amounts From Your IRA to Roth IRA Each Year

For each subsequent year of early retirement adding up over the first five years, you will continue to move money from your traditional IRA to your roth. If you retire at 40 and plan to live on $40,000 a year, you could withdraw that $40,000 at age 45 without penalty.

Step 6: Wait 5 Years (and use a different investment to get by)

During the five-year waiting period you are starting to build roth conversion amounts from your traditional IRA to your roth account you will need some money to live on, right? There are several different investments you could draw from including a brokerage account.

The most common method is to use your roth contributions you made while you were working. Remember that roth ira contributions (not interest earned) can be withdrawn at any time without any early withdrawal penalties and you have paid taxes on this money already. To paint a picture, I like to see my roth as holding three-bucket when doing a roth conversion ladder:

After at least five years, you will be able to utilize the ladder and withdraw your original conversions. For some early retirees, the roth conversion ladder is the method in which they can fund the first portion of their early retirement until they turn 59 ½ and no longer need to be concerned about penalties. More importantly, you do not have to pay income tax on the money coming out of your roth ira account because you paid taxes during your conversion five years ago.

Let’s use the example of the individual who retired at 40 again. They would move money from their traditional IRA to their roth from the time they are 40 until they are 55. By doing this, they have successfully created their roth conversion ladder to fund early retirement. Pretty cool perk just because you decided to wait five years, huh?

How Much Tax Do You Pay on a Roth IRA Conversion?

One last thing you want to consider is how much you will pay in taxes on the roth IRA conversion amount you make each year when creating a roth conversion ladder. Every time you move money from your 401k/IRA to a roth, this counts as taxable income for the year. The good news is, this might be the only portion of the income you do pay taxes on. Let me explain.

Let’s use the same scenario above and say you are moving $40,000 to your roth in a conversion. If you are living off your Roth contributions you made while working and other taxable accounts like a brokerage- then that income has already had taxes paid on it. This means you keep your tax bracket for income very low. With standard deductions, you can have only $20,000-$30,000 of taxable income in that year (or even less).

Alternatives to a Roth Conversion Ladder in Retirement

The Roth conversion ladder is a common way to plan for early retirement, but not your only option.

72t SEPP is another popular way to make a withdrawal plan for early retirement. This withdrawal plan is called the 72t SEPP because it allows you to avoid the 10% tax penalty for early withdrawal (AKA 72t tax code) as long as they are made as part of a series of equal payments over your life expectancy (or until your turn 59 ½).

The first few steps are at the same as the Roth conversion ladder. You fill up your taxsheltered retirement plans while working. Then when you retire you rollover your 401k and 403b into a traditional IRA. You should have already calculated how much you plan to live on every year until you turn 59 ½. You can then take this number (the total you plan to live on until 59 ½) and calculate the SEPP.

Paying the Penalty: The Importance of Having a Plan

If you plan to retire early you need to have a plan in place for investments, how much you need to save and how you plan to withdraw that money early. If you don’t plan for the withdrawal- then you will end up taking a hit and paying the penalty of 10%. Ouch.

Is there a limit on Roth conversion amount?

No, there is not a limit to the amount you convert from your 401k/IRA to a Roth IRA. If you decided you wanted to convert $100,000 one year you can. Just keep in mind that this strategy only works if you don’t run out of money. It’s important to look at this long term and make sure you still have funds even when you turn 59 ½.

When should I do a Roth Conversion?

Can I do a Roth Conversion if I am Retired?

If you retire at 59 ½ then it might not make sense to do a roth conversion ladder as your funds for a 401k/IRA will then be accessible penalty-free.

Where Can I Open a Roth IRA?

How Do I Avoid Taxes on a Roth IRA Conversion?

You probably won’t be able to avoid taxes altogether on a roth IRA conversion. You can try to reduce the amount of taxes you owe by making a roth conversion when:

Do I Need an Accountant or Financial Advisor to do a Conversion Ladder?

The short answer is no. Those wishing to receive independent financial advice should do so though. They may however receive compensation for helping facilitate these conversions for you. So just keep that in mind when you’re trying to access your retirement funds early. Personal finance is personal, so do what makes you sleep well at night and have confidence in your retirement plan.

Why Should I Consider Doing a Roth IRA Conversion?

For those looking to retire prior to a standard retirement age such as 65 years old, and before social security kicks in this is a great way to access your retirement accounts. The amount converted is entirely up to you, and can be done at any time. For those who have reached financial independence and are ready to retire early, this strategy is a game changer. The annual roth ira income you’re able to draw from beats having to pay 10% penalty any day.

Early Retirement Can Be Taken One Step At a Time

The roth conversion ladder may seem overwhelming if you are new to FIRE. What you should know is that you do have options for withdrawing your money early. But the first step is to get your finances in order and start putting away money into your tax-sheltered accounts as soon as possible. You’ll need to build that nest egg before you can do any kind of conversions for early retirement.

If you want a step by step guide to FIRE, check out the 12-chapter ultimate FIRE guide on our site.

Samantha uses her BS in Finance and MBA to help others control their finances through budgeting, saving, investing, side hustles, and travel hacking. Due to following the FIRE Movement’s principles, she was able to quit her high-stress job in the financial services industry in July 2019 to pursue her side hustles. She is now a full-time entrepreneur, freelancing coach, and blogger.

Great Article on the Roth Conversion Ladder Thanks! I am 45, Retired early and this is year one of my Conversions. Thanks again,